A Portrait of My Hometown Eisenach, Thuringia, Germany For You

Welcome to this page of my website. Because actually you didn't want to learn more about Eisenach in lovely Thuringia, Germany. However, you are here on the search for a family researcher. True? However, a little service is what I would love to provide here for you. As actually, you don't just research for a genealogist: you are looking for the family researcher, with whom you want to cooperate and research together for the next years. So there should be a good chemistry between you and your specialist. For helping you to make up your mind – maybe with me as your future family researcher – I provide you with a little more information about my exciting hometown Eisenach in Thuringia, Germany. 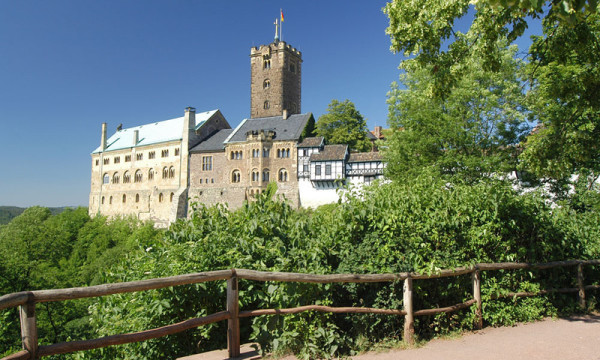 Even if you are currently searching for a family researcher in Thuringia: just stay a few minutes here and learn more about the native city of Johann Sebastian Bach, which is Eisenach. In a good temper, you may go on looking for your genealogist in Germany after that. By the way: What you see in the picture above is the castle of Wartburg, the landmark of Eisenach.

What do you make of it, if you learn more about Eisenach, Thuringia in Germany the convenient way? One mouse click and you are able to watch sights from Eisenach, you hear about Eisenach and you will enjoy nice music ... the music of Johann Sebastian Bach, but from other artists too. The video about Eisenach is the first of four: Please click here.

There is a second video: it's one of Johann Sebastian Bach's immortal music works plus what you see is – one after the other – dreamlike photos of the Bach city of Eisenach. Just watch nice photos, plus listen to one of the super works of Bach: an offer for the connoisseurs among you.

Plus, there is a third video, which matches Eisenach perfectly. Because in Eisenach the Bach House and the Bach Museum is located. This third video is an ultra-short, but exciting information about both institutions.

Finally, the fourth video is a nine-minute short biography about the Thomas Cantor and Royal Polish and Electoral Saxon Court Composer Johann Sebastian Bach. With music, narrated text and a great variety of pics to watch. 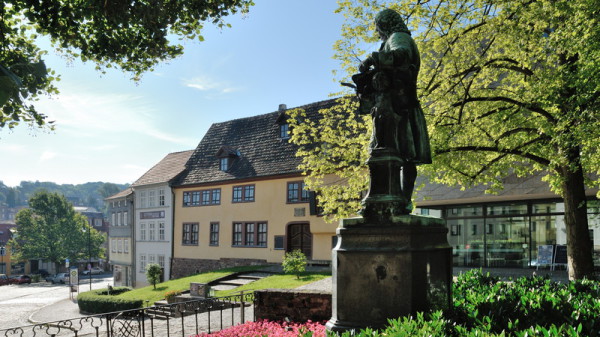 The Bachhaus in Eisenach, Thuringia, Germany. However, Bach wasn't born in the yellow house in the middle of the photo. Bach was born a few houses further in the direction of the city center. Just some information regarding the genealogy of Johann Sebastian Bach.

The Bach Museum next door to the Bachhaus in Eisenach. The street's name is "Am Frauenplan". Almost ten years Johann Sebastian Bach was living here with his parents and his siblings. Next station in his life, after first his mother died and shortly after that his father, was the Bach City of Ohrdruf, Thuringia. 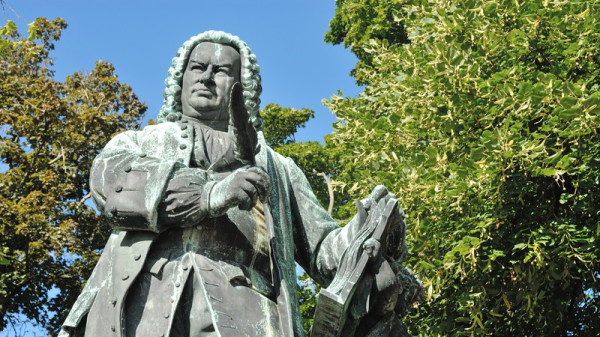 One of the first and as well one of the most considerable Bach memorials. Beyond Eisenach there are more Bach monuments, which honor the composer In Germany: in Leipzig, in Ohrdruf, in Arnstadt, in Weimar, in Mühlhausen, in Köthen, in Dornheim, in Ulm, in Ansbach. Plus, one in Shanghai, China and in Pittsburgh, USA. And finally, there is a badge to honor Bach at the Opéra in Paris, France. Just if you might be more interested in the genealogy of Bach.

Again, let's get to Luther and let's get to Bach. There are not that many cities, which you may connect to both personalities. Erfurt is such a town, but Erfurt is Bach City, which is only tenderly related to Johann Sebastian Bach, but to the world's famous family of musicians, the Bache, how they were called back then.

Eisenach in Thuringia, that is two famous names in Germany and several highlights, which you may visit. Here Johann Sebastian Bach was once living for almost ten years, before he moved to Ohrdruf, after first his mother and within one year later, his father died. On the right side of the Bachhaus the Bach Museum is located, and one step further on the right, you'll find the Bach Memorial, number 3 in the "Bach Trilogy" on the "Frauenplan Square" in Eisenach.

However, Eisenach is as well strongly related to the name of Martin Luther, as he spent some time together with the Cotta Family in Eisenach. On the Wartburg Castle, which is located real close he was protected to translate the bible.

The City of Eisenach in Thuringia: That is as well the so-called Burschenschaftsdenkmal, sort of monument honoring a historic group of students. There is the City Palace, the St. George Church – by the way, St. George Church is the Christening Church of Johann Sebastian Bach – and a wonderful environment, where you may spend a few days of vacation. 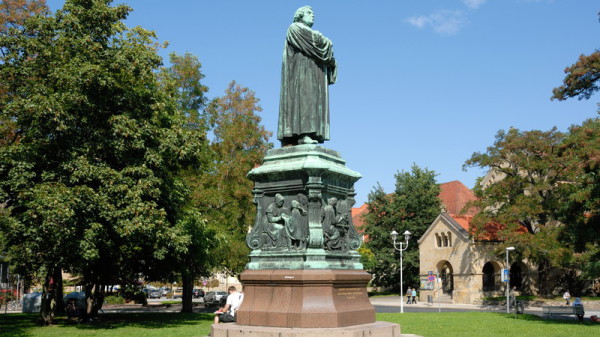 Luther, one of the two great personalities, which are connected to Eisenach in Thuringia: in the photo above you see his memorial. Regarding the Luther genealogy: You really will find nothing on my website. Promise. 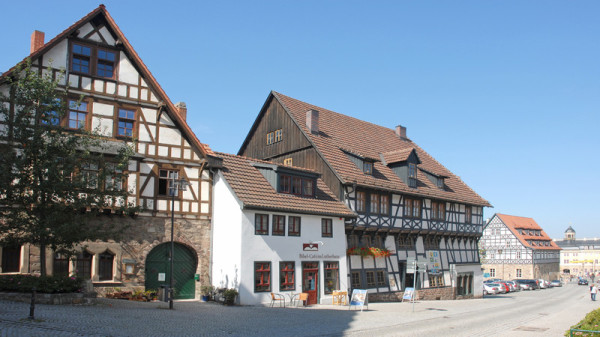 Almost to the point in the center of Eisenach you find the Luther House. It is just a stone throw away from St. George Church, on your way from the Bach House to City Hall. Or vice versa. Of course.

Firstly, Eisenach is a beautiful city. For some 42,000 residents, it's not too large and it's not too small. Eisenach, that is nine urban districts. The city council is located "Am Markt 2", which is at "No. 2 Marketplace". Visitors from all over the world are excited by the touristic offer. However, what counts for the residents is the fact, that Eisenach is economically powerful. Back then they assembled the car called Wartburg here. Today, Eisenach is famous for the German car brand of Opel. Together with Bosch, both companies provide some 4,000 jobs. 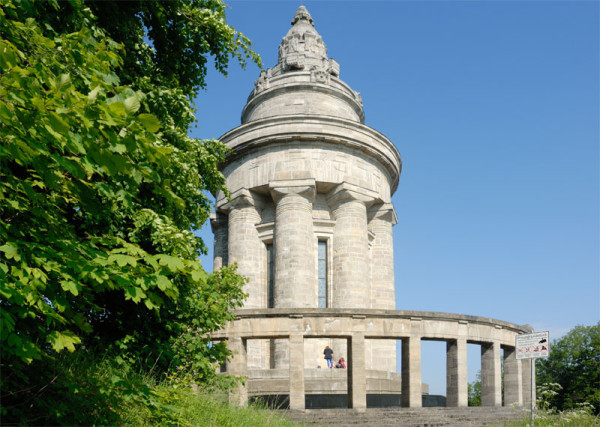 The "Burschenschaftsdenkmal", high above the City of Eisenach. From here you have a spectacular view over the city and to the Castle Wartburg. If your genealogy leads you to Eisenach – and you need a time out – here it's exciting. Take a short time and manage to visit these place in Eisenach, Thuringia. 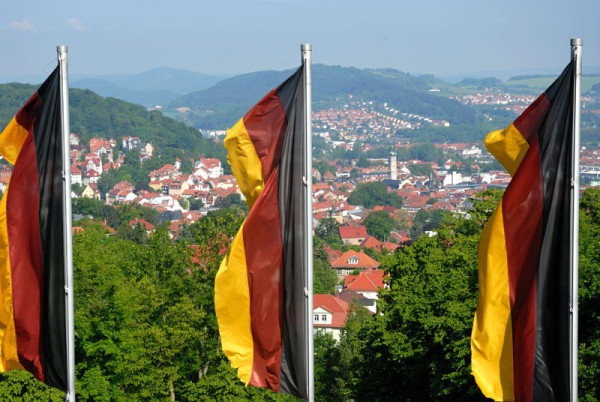 The view from the "Burschenschaftsdenkmal" over the beautiful City of Eisenach ... 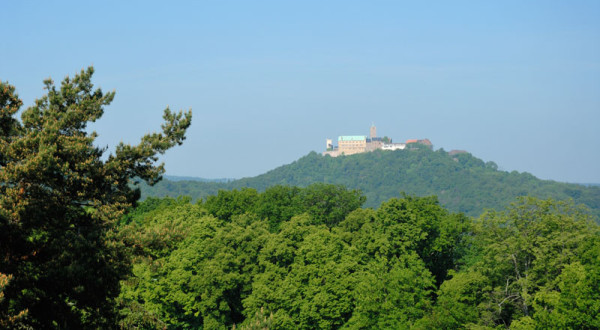 ... plus to the Castle Wartburg, the landmark of Eisenach in Thuringia. The Wartburg is meanwhile declared "World Cultural Heritage" by the UNESCO. In the medieval times, it was the seat of government of the Landgraves of Thuringia.

The History of Eisenach, Thuringia ... Prepared for You to Perfection

5,500 years back in time, that is to say long before Jesus was born, the first traces of human settlement date in Eisenach. In the Thuringian Museum, you are invited to marvel at the early corpuses of finds. Until the year 531 Eisenach belonged to the settlement area of the Thuringians. Only according to the myth Ludwig the Springer ( ... which is Ludwig the Jumper) had the Wartburg built in the year 1067. 1080 the Wartburg is mentioned in a record for the first time. Eisenach is mentioned 1180 for the first time, by the rule of the thumb. In the year 1342 a huge blaze destroyed almost all houses in Eisenach. 1498 Luther came to Eisenach, to learn Latin here. In 1522 he translated the Bible into German. 1685 Johann Sebastian Bach was born not far away from the Bach House. In the middle of the 18th century, Eisenach became a cultural city more and more. In 1751 the construction of the Town Palace was accomplished. In World War II Eisenach was bombed heavily and many historic buildings were damaged to the foundations. July 1st, 1945 is the last considerable date in the history, when after World War II the Sowjet control began, which led to the German Democratic Republic, DDR. and finally into the present after the reunion with the western parts of Germany.

You can get much, much more and more detailed information about the history here. It is more than 5,500 years of history in an exciting city. 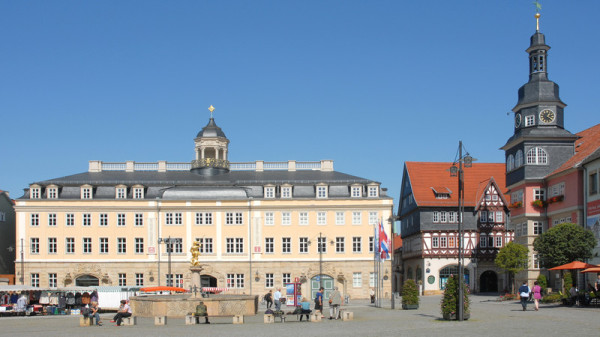 Exciting places in the city center of Eisenach: the City Palace ... 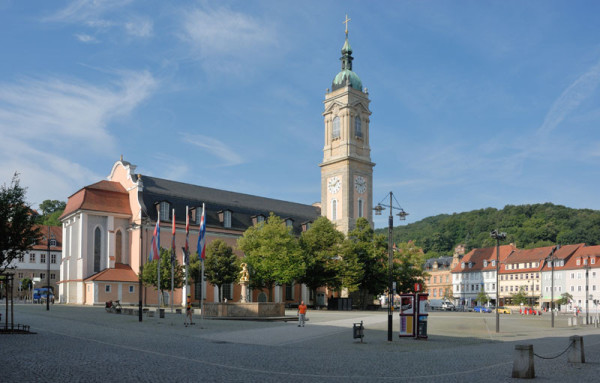 ... the St. George Church next to the market place in Eisenach ... 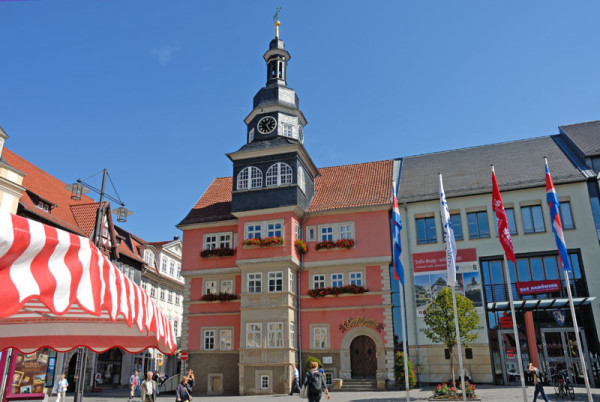 ... and between City Palace and St. George Church beautiful City Hall of Eisenach in Thuringia is located – sort of – it's not precise down to the foot.

Photographed for You with Great Commitment: Many Pictures from My Hometown Eisenach in Thuringia 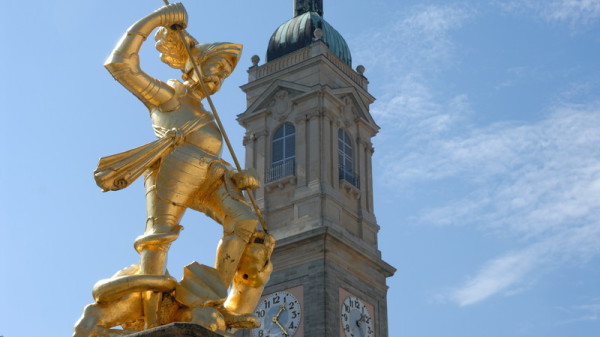 The fountain in front of City Hall in Eisenach. 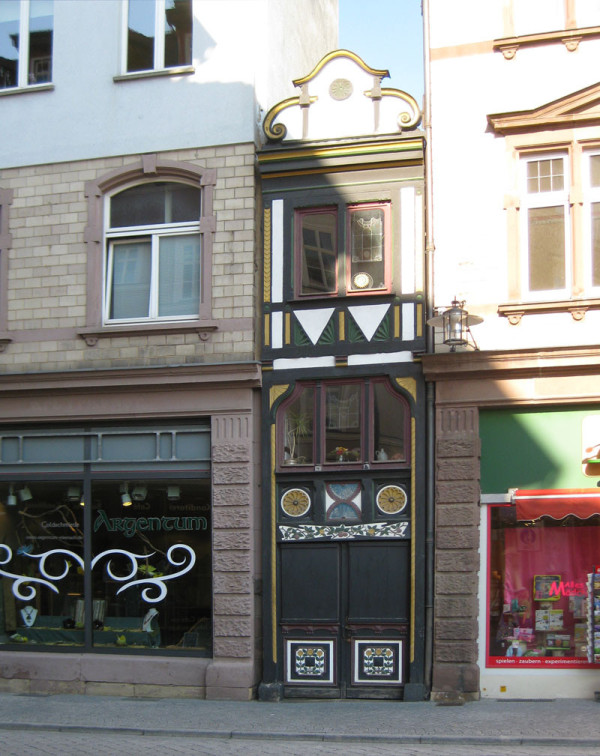 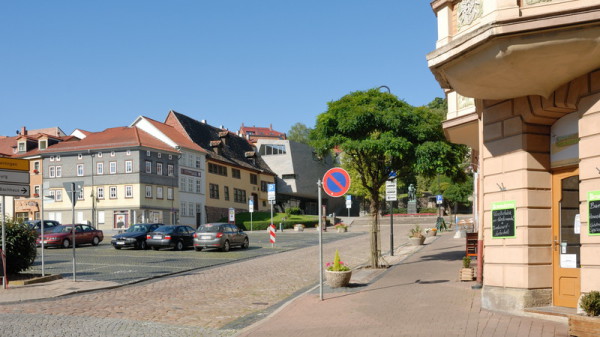 Some of you might know what the Bach House looks like. However, where it's located, is what you don't discover on most of the photos: here at the "Frauenplan" in Eisenach. On the left side, there is a yellow building: this is the Bach House. Behind the Bach House the modern building of the Bach Museum is located. And very tiny, really very, very tiny on the right, next to the museum, you discover the memorial of Johann Sebastian Bach, right of the white parking sign at the curb of the road. 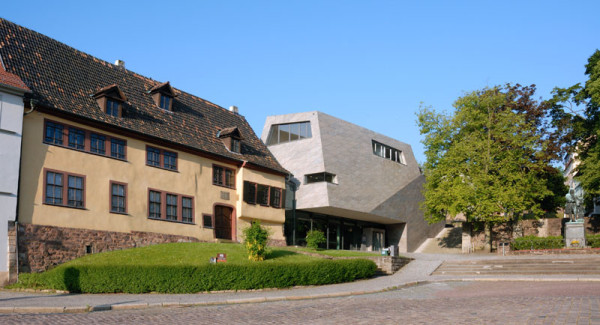 The Bach House and the Bach Museum in Eisenach during sunshine ... 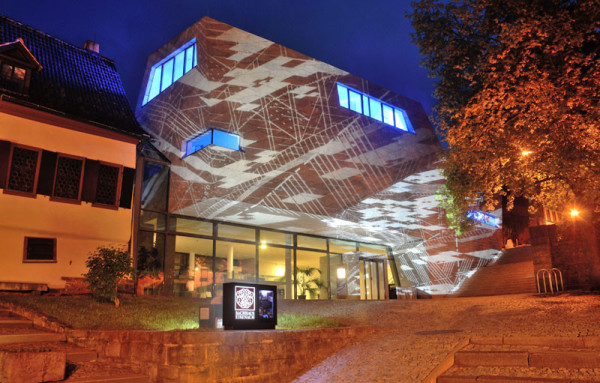 ... and the Bach House and the Bach Museum on the right in the "blue hour" with an exciting illumination created by the light artist Ingo Bracke. 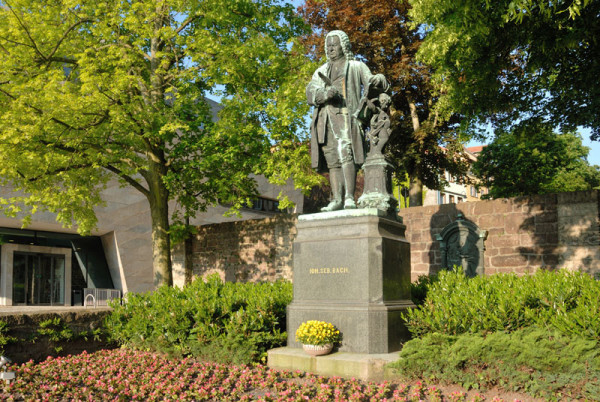 As a last photo of my hometown of Eisenach in Thuringia the famous son of this city again: There's no doubt, it is Johann Sebastian Bach.

Without Many More Words: Four Videos About Johann Sebastian Bach and About My Hometown Eisenach in Thuringia

Enjoy the ultra short video with narrated text about the Bach city of Eisenach in Thuringia, Germany. However, it's short: just four minutes.

As promised earlier: just photos of Eisenach, Thuringia, Germany. They come with a music work of Johann Sebastian Bach. The whole video has a length of just four minutes. No narrated text, promise.

It's a real ultra short video about the Bach House and the Bach Museum in Eisenach, Thuringia, Germany. However, it's worth to watch.

Now ... you can't get enough? About Johann Sebastian Bach? Here's a short biography, with music and narrated text, in a length of a little longer than nine minutes.

Bonus Stuff for the Very Brave Among You Eisenach Fans: One More Video for You

If I managed to impress you with so few corner facts about my hometown of Eisenach in lovely Thuringia and you are still around here, then you deserved, how our Bavarian neighbors would say a "Schmankerl", a delicacy, which not necessarily is something to eat. It is not related to the theme of Eisenach too. Plus, that is true for Thuringia as well. It is about a trip around the world. Johann Sebastian Bach is displayed regularly on postage stamps around the world. With his music, you are offered a trip around the earth and through time. And it goes without saying that this highlight is not just for stamp collectors, maybe least for those. Have fun watching it.

Now come on, click the play button. My promise: you never ever before saw a tiny postage stamp collection presented like this one. And you may "leave" after four minutes, which is fifty percent of the full length. Enjoy. 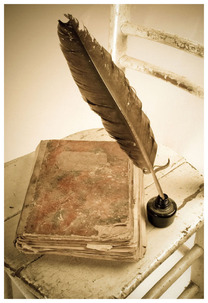